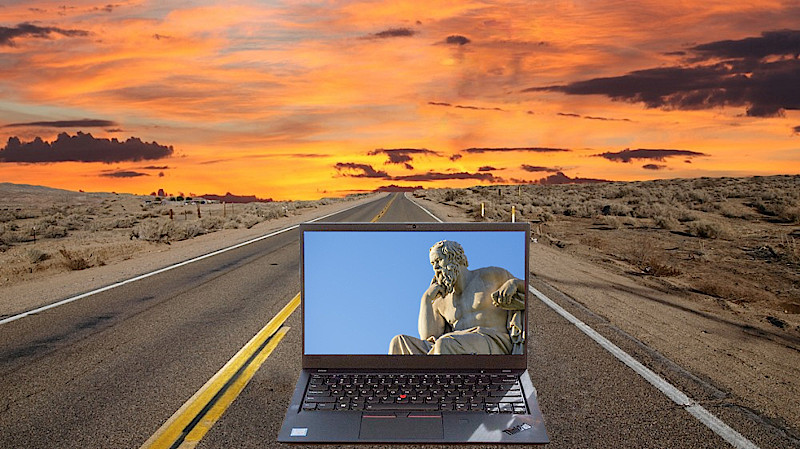 It's a simple definition, yet considering those elements then 'philosophy' has a lot on its plate. Human thought, society, the world, the universe, that's quite an area to cover let alone trying to explain to the satisfaction of many or even one person. If you're someone who participates or has participated in online philosophy forums such as I did some years ago then you know that attempting to explain aspects of that area can be interesting. It can also lead to situations such as the following recently described by a poster in a currently active philosophy forum:

What can be said about such an admission? Well, the person doesn't have an exclusive patent on the sentiment because I've seen it in varying degrees in others and with myself when I started participating in online forums back in 2000. The difference with me - and perhaps an 'old school' difference at that - is that I didn't create discussions just for the heck of it and not get involved. I read through the posts and understood what was being said unless it contained technical terms which I was not aware of, and I don't remember having to particularly improve my concentration and reading comprehension (though I certainly consider improvement an ongoing element at any level). In any discussion it's best to know the elements of it as fully as possible and especially the terms employed in their explanation. Those of you who have had experience with online forums probably already know about encountering the white-water rapids of semantics in exchanges and sorting through that can often take more time than the topic at hand.

The second paragraph of the poster's quote can be emblematic not only of an online forum but of the web in general. Whatever you see on the web boosts the self-esteem of someone in one way or another. At a basic level the participant feels he or she is doing something. On other levels, that 'something' can become complicated, i.e., the esteem of a hacker is not shared by those who were hacked.

With that and others' aspects in mind then I would have to echo the sentiment in the forum introduction post: Why a philosophy  forum?

The idea of adding a philosophy forum stems from when I participated in what is now regarded as the original forum for philosophy, 'philosophyforums.com' (PF), which was designed and administered by Paul Knierim. I joined PF on July 1, 2002, two and half months or so after it started and what I liked about the forum was that the members would be substantial with whichever topic was being discussed and write a few paragraphs if necessary in a post to explain their views. For me it was nice to see that and more substantial than other forums I had seen and especially "chat" rooms which at that time were still around but the writing was already on the wall as to their demise.

Recently, I looked around online to see if I could find anything about PF or what Paul was up to. I figured that maybe some of the current philosophy forums would have former members and maybe even Paul. Sure enough, I got lucky by finding, 'thephilosophyforums.com' (TPF). Some of the members are from PF back then and addedly Paul had visited occasionally. I posted something on it and Paul answered with some brief details about what happened with the original PF. I told him that I thought about a possible reunion of the original PF forum members, that it would be interesting to learn how others from the forum had fared philosophically or personally in the past 17 years. Needless to say, it's a long shot trying to find the original members of PF and as Paul mentioned some of them may have already passed on to worlds and forums in other dimensions. Nonetheless, I think it could be interesting and even if only 20 members or so are found then that would be worth it. Note: When I say, 'original members', I am referring to the first 3-5 years of PF.

An important note I'm adding here is that I mentioned in TPF that since it is the "new" PF then it would be appropriate for the reunion there. That was over a month ago but I haven't received a response either way from any of the TPF members. I note this because I don't want it to seem as if I'm trying to hijack members from an existing forum and especially one that seems to have been made by and for 'expats' of PF. My intent as noted in my post at TPF is for a "temporary reunion". This is not a thing of having the original members come back and everyone going for another round of years discussing philosophy and related concerns. Too much water under the bridge for that and as it has been said, you can't step into the same river twice. It would simply be some people reacquainting themselves with a specific time and space and the others involved. It will have it's cycle of relevance and immediacy and then as all things pass, it will too. The important thing is to enjoy it while it is in its vibrancy. Those with a few years in pocket are probably well-versed enough in vibrancy vs. entropy and don't need the details from me. :-)

Here are some names from the original PF: Aniket - Baron Max - Colleptic - DarkCloud - denial - Distortion - Fire drill - geoff23 - Gotmundsdottir - i know - Interlocutor - Libertarian - mrmike - Myth - Nihilistic Locomotive - Prime Directive - ralldurai - Rigor_Mortis - Sharif - steve - the_visionary - Tobias - Wax - Xev - xxuxx, and of course, Paul. Let's see if through the magic of SEO, metatags, word of mouth, and good ol' cosmic coinkidinks some of them read about it wherever they may be. By the way, on PF I was known as, 'Spaces'.

And if the reunion doesn't happen? No problem. Life goes on. :-)

So friends, with that in mind then I guess you could say I'm trying to reunite some people before they leave 'town'. And may I add that when the time comes for your departure may your travels on that highway be smooth and with rest areas to your liking. :-)

This piece is repeated in the forum and the reason I have also placed it here is if anyone wants to comment only using the Disqus form below rather than the process of registering to the forum to respond there. Registering is easy though I have set it up with notification to me before members can post for the first time. After I receive notice about a registrant then I immediately notify him or her that they are able to post, etc.