Once again my friend, Dave, from Los Angeles visited here for a few days of going to some favorite places and for us to catch up on how things have been going in our respective worlds.

This visit was supposed to happen last year in the autumn but due to matters at Dave's work he wasn't able to. This time, he took an extra day and we put it to use going to Lake Mead twice (different areas), a bus tour; actually, just taking the regular bus to visit some casinos which gave Dave a day free of driving, and on the last day we went to Ash Meadows.

Having seen the lake level decrease in our past visits I suggested driving farther out to where we could possibly get nearer to the lake. So we went on Northshore Road to Callville Bay, one of the remaining marinas in Lake Mead. On Google Earth I had noticed a trail that led from a campground parking area to just about the shoreline but when we got there that trail was actually hilly and would have been a bit strenuous. That in itself wouldn't have been a problem but we arrived around 2pm so it was simply a matter of time before sunset and not wanting to spend most of that in hiking there and back. We parked the car by the marina boat ramp and from there did a short hike up a hill where we found an area to enjoy the atmosphere and view. 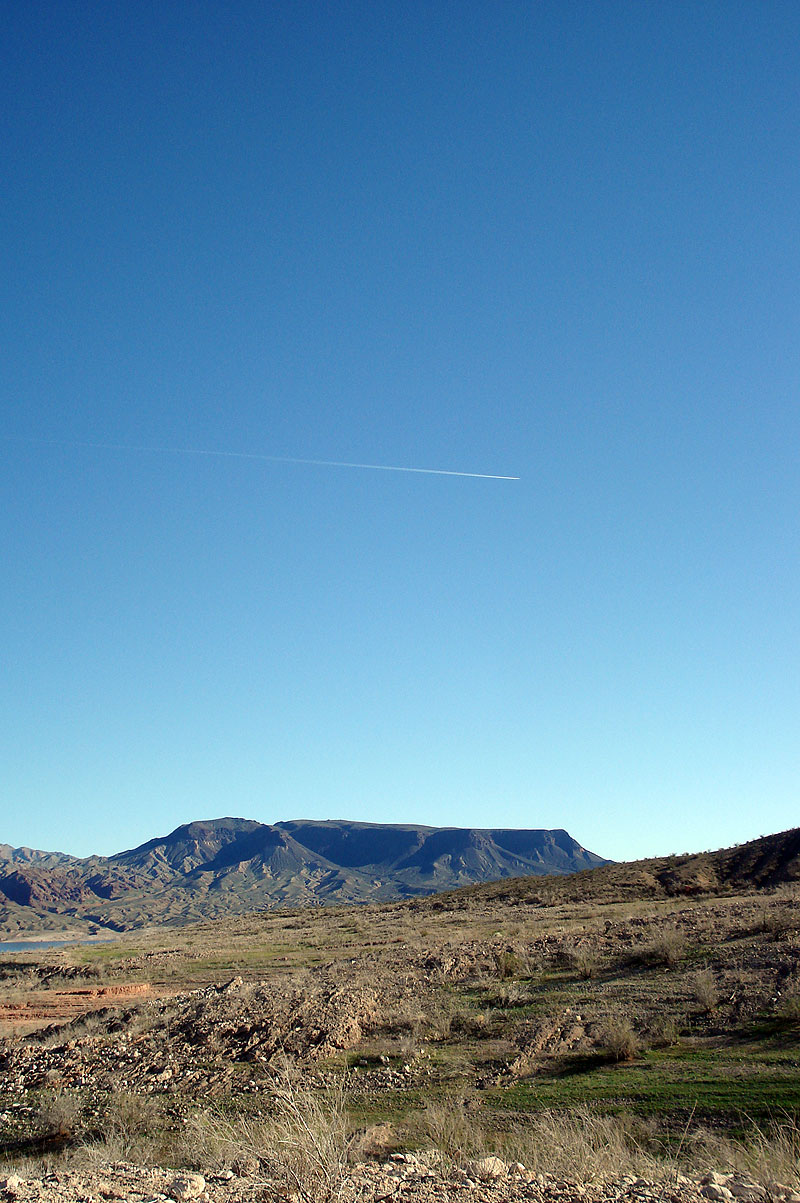 The ever-impressive Fortification Hill on the lake's southern shore. Descriptions I've read of it say it's an extinct volcano or a mesa that was capped by lava flows from a supervolcano in the Miocene epoch. I don't see it blowing its top in my lifetime but this article from 2015 states that dormant volcanic earthquakes in Nevada indicate greater pressure in the Southwest U.S. 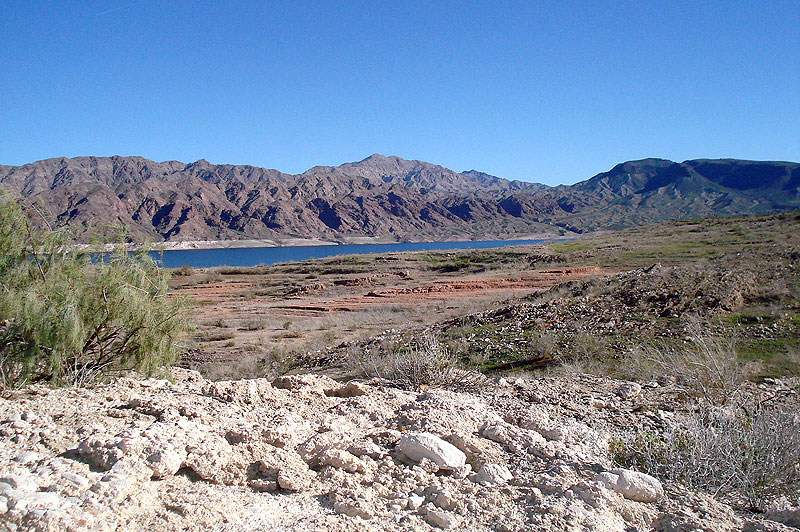 Fortification Ridge runs east from Fortification Hill. At its bottom the 'bathtub ring' of the water-level drop can be seen. To give you an idea, if the levels were at normal then a sizeable portion of the middle foreground would be underwater. 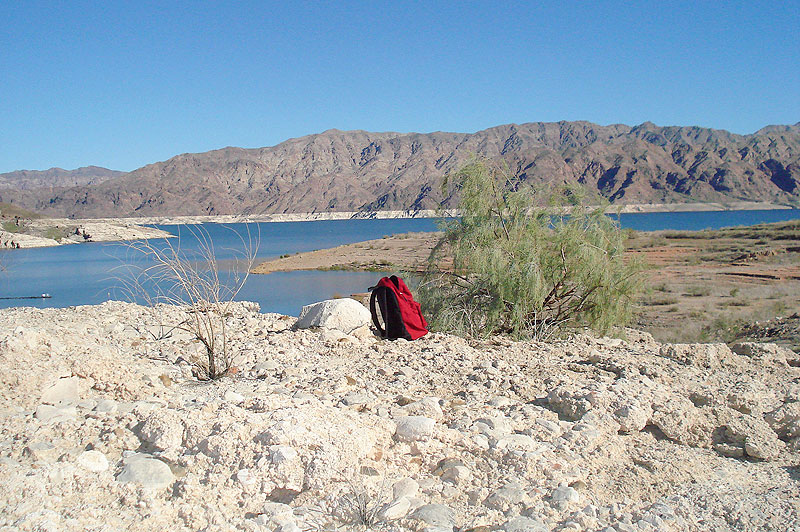 Continuing east, Dave's red backpack offers a distinctive note to the scene. This image is at an angle that if water levels were normal then it would be all water past the foreground of white rock and bush. The following images speak for themselves. In the middle is the 'viewpoint' marked by a yellow thumbtack. This is the area from where the previous photos were taken. 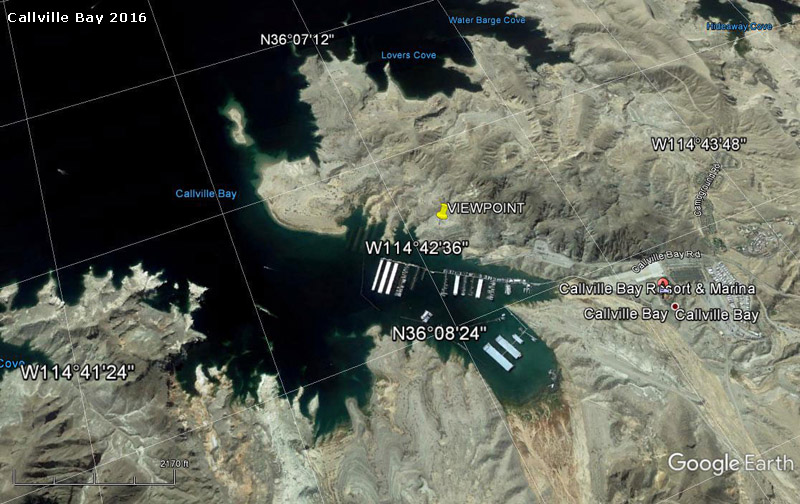 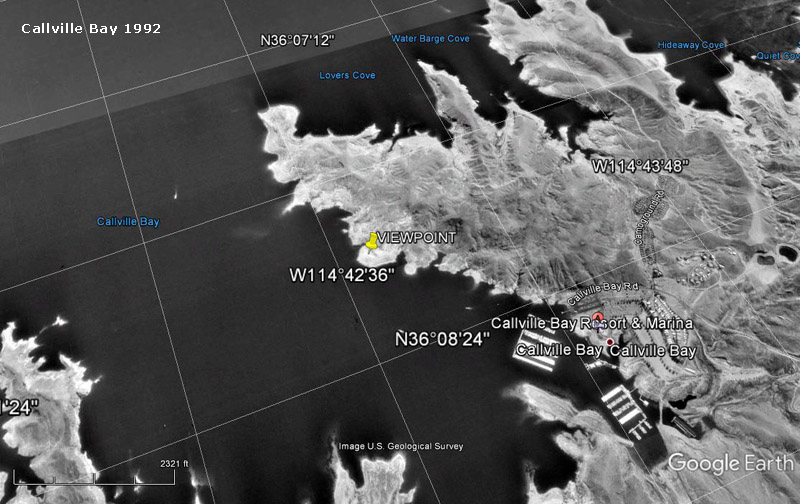 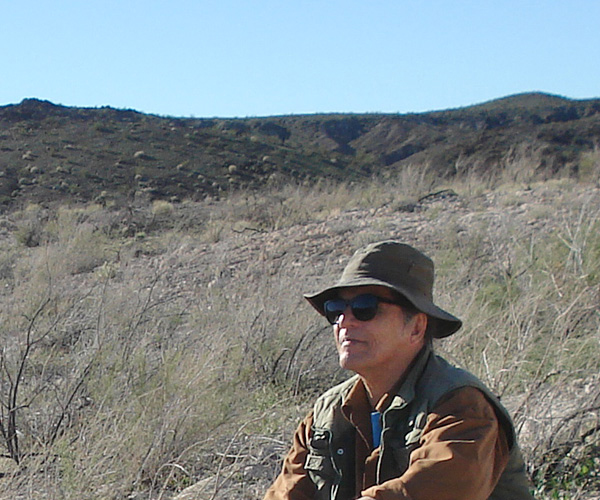 Pondering the Holocene and Anthropocene.
Though mostly enjoying the personal, present view.


I think it wise to return soon, future-soon, and rent a houseboat for a few days of serene rides exploring the lake. Yes, there's still plenty of water in the lake for those of you thinking about visiting. If you don't go boating or hiking then drive on over to Boulder Beach for an easily accessed, expansive view.


As we were leaving I took a brief video of the quiet marina.

video: Callville Bay Marina
(Note: Mobile users might see only the video controls but they do work to bring up the video frame.
You may also hear a slight, whirring noise due to it being an older camera.)


The next day we rode the city buses to visit the Strip and downtown. Below, Dave is in the foreground and across the way is Container Park with shops and restaurants housed in shipping containers (construction costs were no doubt reasonable :-D). The place is not that big but interesting enough for a few minutes' walk-through. 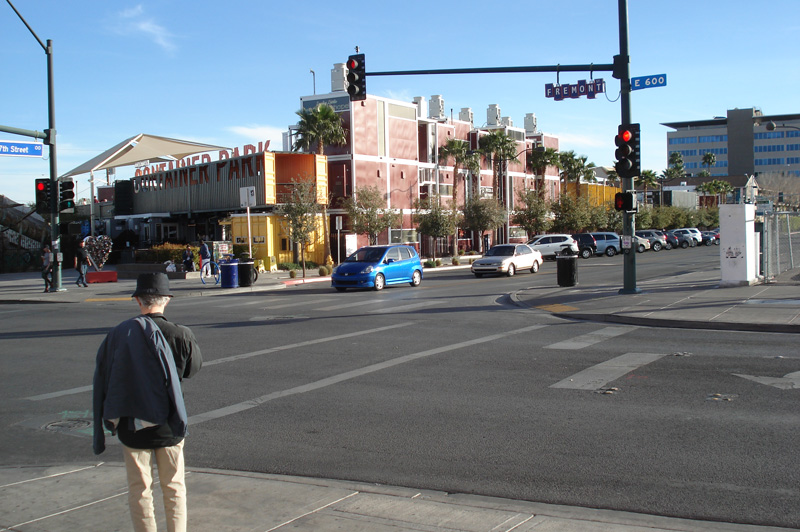 You can almost see me in the middle of this view of what is called the 'Fremont St. Experience'. On the image there is a tiny white dot that I placed right below where I'm standing. 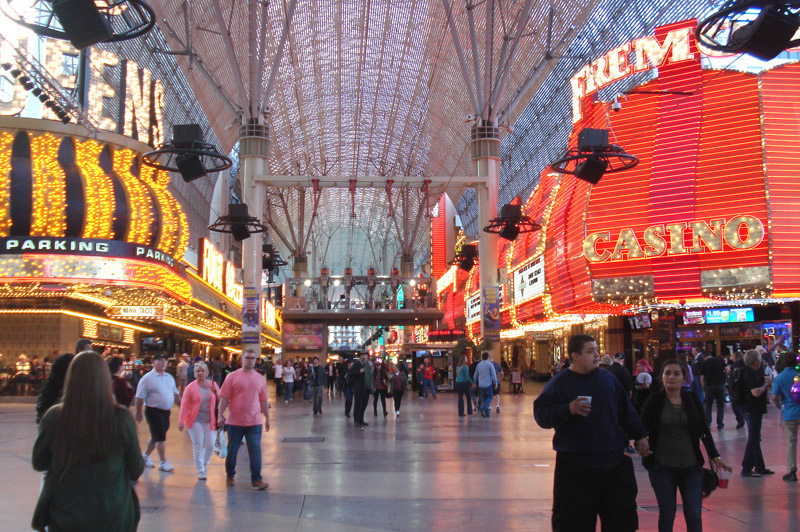 For a few years now there has been an increase of street performers on the Strip and downtown Fremont St. In one of the photos that Dave took of me standing there this particular performer seemed on his way to work. As for the front view, let's just say it was the barest minimum allowed by decency laws. The guy in the 'undead' shirt looks like he's trying to make some sense of it. What kind of performance did the stringed fellow do? Dave and I weren't interested, we had seen enough already and so we left. 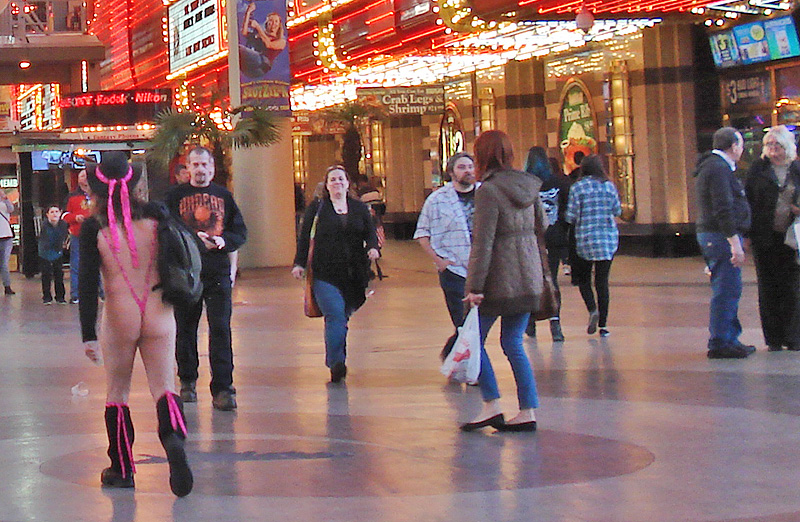 On the way to the transit center for the bus which would take us to the Strip, Dave had an impromptu "Singing In Las Vegas" moment; possibly due to the Orange Julius drinks with vodka we had earlier. There was hardly anyone on the street and so no coins in the hat. 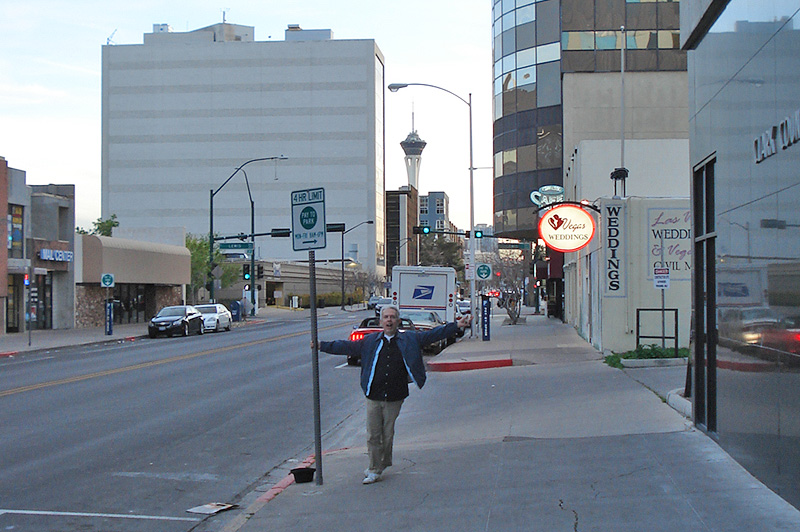 The bus dropped us off at the SLS hotel which used to be the old Sahara. I hadn't been to the Sahara in years and while the hotel-side entrance seemed the same other than a little sprucing-up here and there, it was the casino area that showed the most remodeling with an industrial look where the ceiling was removed exposing pipes and ducts all painted black. The walls were different colors with some artworks and the floor had colorful carpets. I didn't take a photo but here's a large one I found online of the center bar with overhead LED display.


We had another OJ/Vodka to boost us for the two-mile walk down the Strip to the Bellagio Hotel. Walking it at night is a little strange since for a mile it's dark making for a surreal contrast with the more illuminated part of the Strip in the distance. An eerie reminder of natural night encompassing artificial declarations.

We stopped at the Venetian Hotel for Chinese fast food, then a quick walk to the Bellagio. On Dave's visits we usually go there to see the Conservatory, an area for season-themed flower displays but this time the next display was under construction. Here is a video of the exhibit that was constructed.

Before leaving we saw the fountains show. While there I took a video of the Cosmopolitan Hotel next door which had a large LED video display at its top. The voice you hear in the background is Dave's whose brother just happened to call him. Dave tells him he is in Las Vegas. Oh, and we each had another OJ/Vodka. Hey, it's a lot of walking. :-D 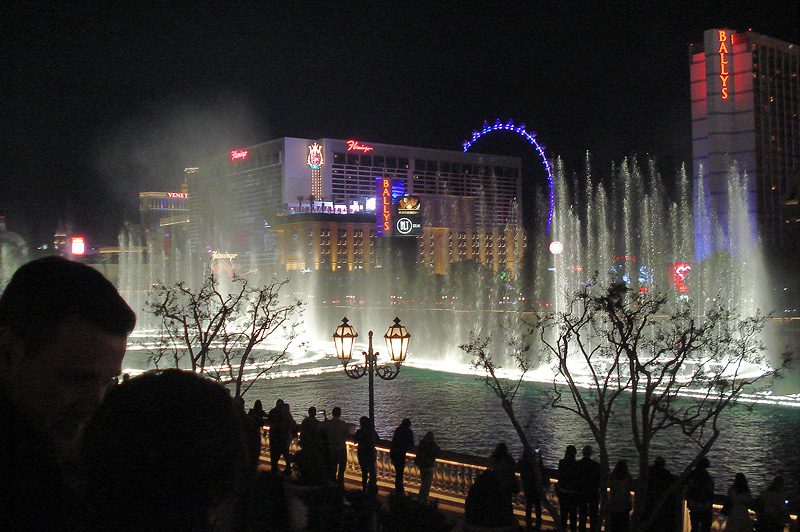 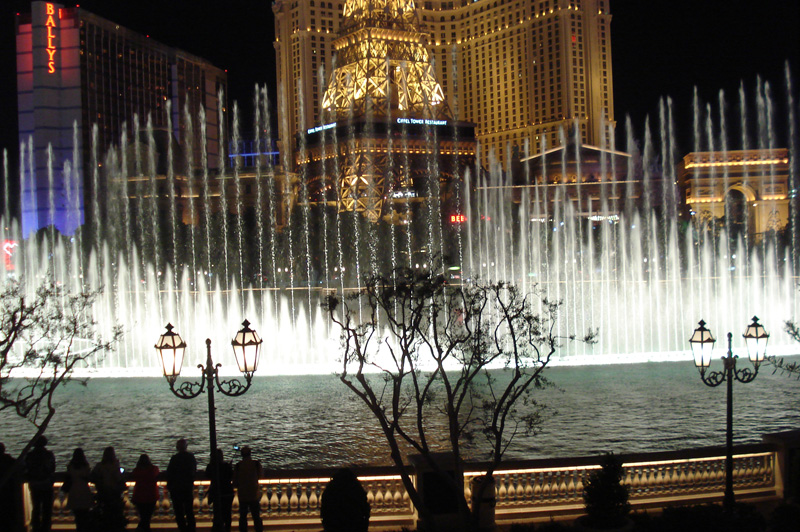 
That was it for the evening so from there we proceeded toward Tropicana Boulevard to the bus stop. It's a short distance but pedestrians have to take the overhead walkways that were built in the late 90's-2000. The reason for them was because traffic was becoming impossible along with the large flow of pedestrians and of course the many accidents that resulted. It's safer now but the time has doubled to cover the distances and it can be quite the physical workout especially when some of the escalators that take you to the walkways aren't working; yes, there are elevators. So if you plan on visiting Las Vegas and walking from casino to casino along parts of the Strip, make sure you have the best walking shoes possible. Seriously.


On the third day we went back to Lake Mead but before doing so we went to my aunt Alma's place so Dave could visit her. Dave and I have known each other since high school so he's regarded by my aunt as almost a second nephew. Alma is now 91 years of age. Here's a photo of her and Dave. 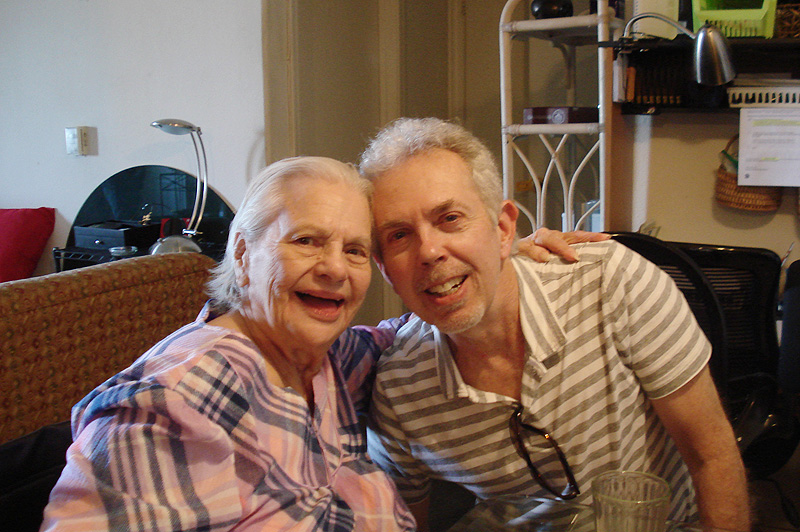 At the lake we went to a place we've usually visited before, '#33 Hole'. After nearly two years the water-level drop was noticeable especially in the narrowing of the channel between shorelines. This time we explored a little slot canyon near the parking area. Not as spectacular as Arizona/Utah slot canyons but interesting in its own way. The following are photos of the slot, two of them of a tunnel you have to walk through. One I took of Dave with the faint glow of his phone light, the other Dave took of me as I exited the tunnel. As can be expected, the tunnel has interesting acoustics. 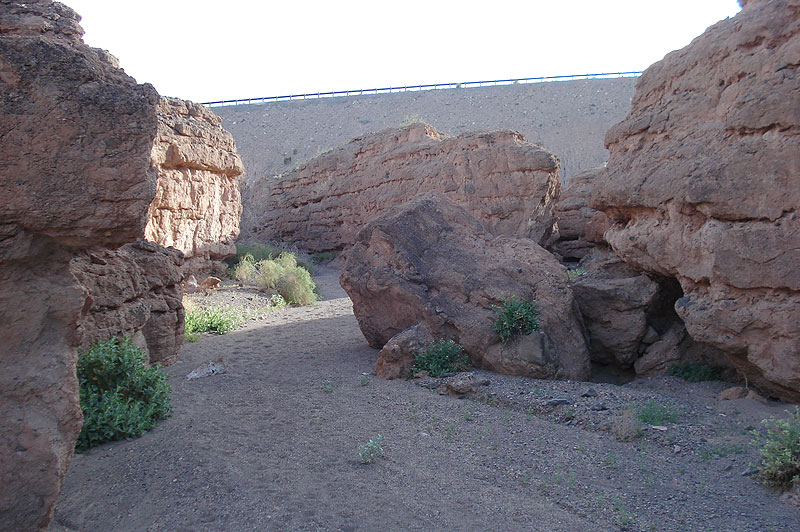 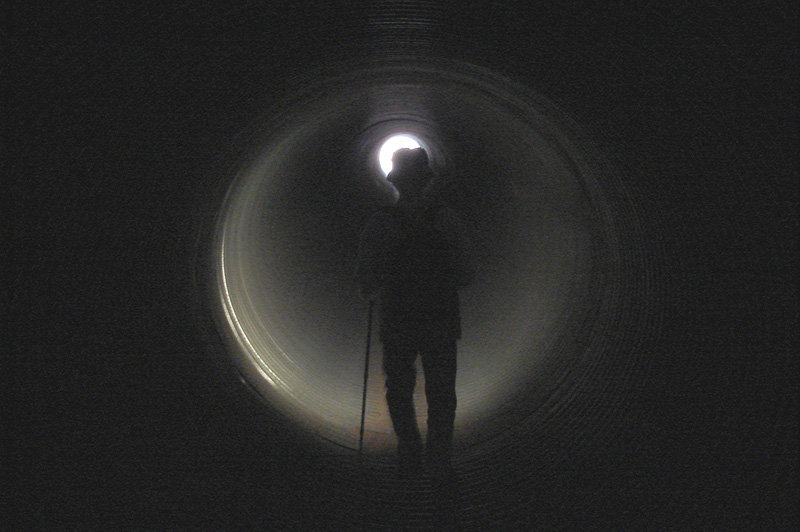 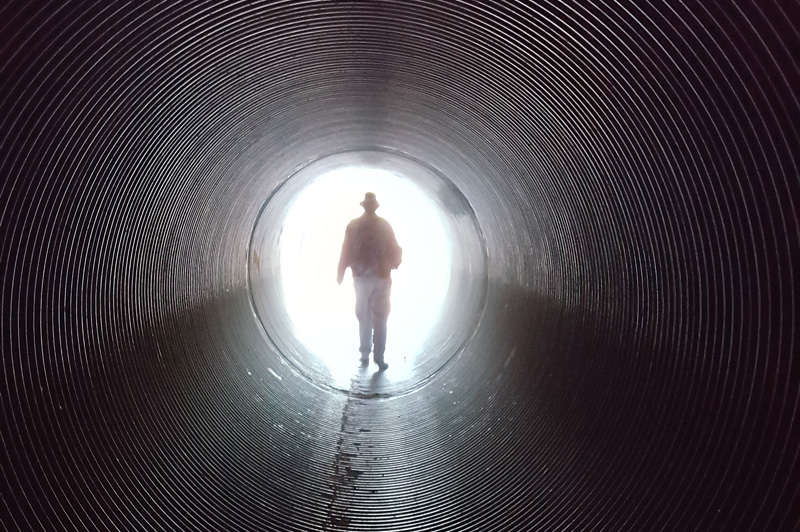 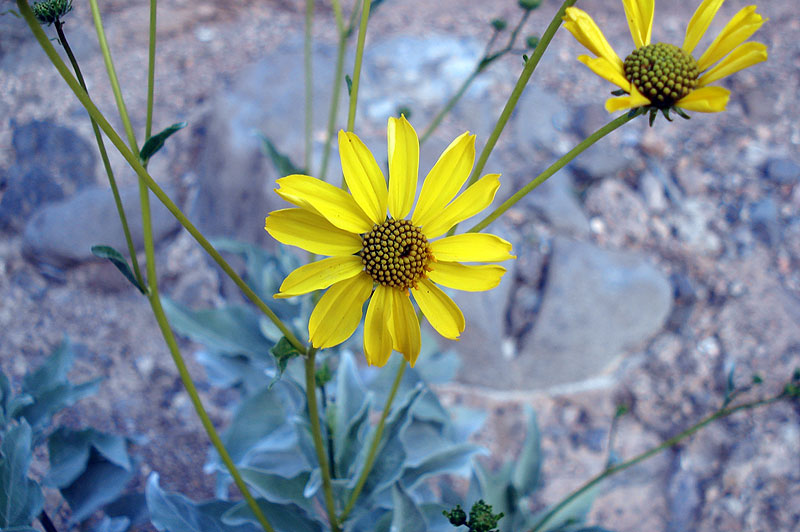 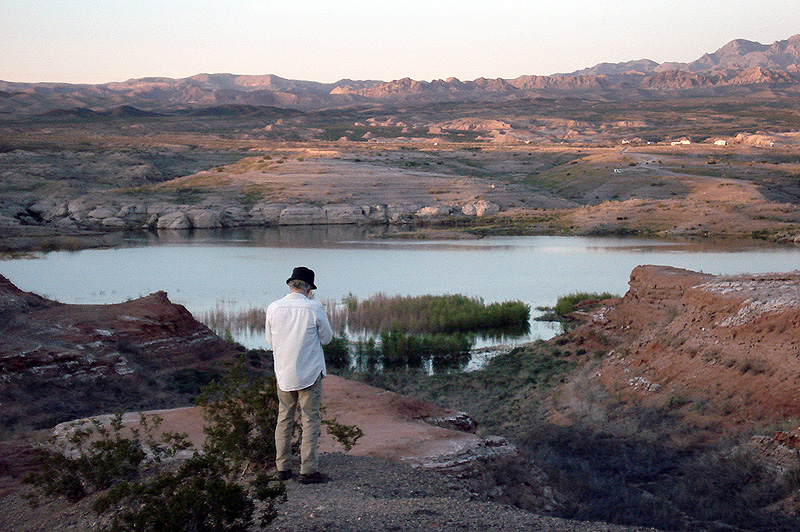 Below, Fortification Hill at sunset. Taken by Dave from position in the above photo. 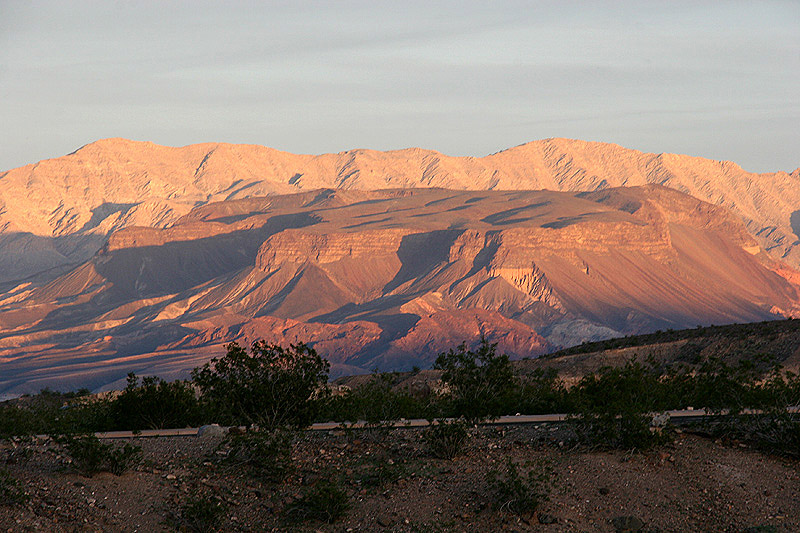 Here's a link with more photos and description of 33 Hole slot canyon. Hover on the dots and right-click for a slide show. The map also zooms in/out with mouse wheel. Note: On the phone the dots and map do not show but the pictures do if you scroll down.


On the fourth day we went to Ash Meadows. It was good to be there again and the weather pleasant with temps in the high 70s to 80s. I had thought there would be some early blooms and greenery but by the look of it the show would be in another month or so. But regardless, Ash Meadows always gives me a peaceful feeling. Visiting there is also visiting an inner place, a state of being.

Dave on a bench in the boardwalk loop. 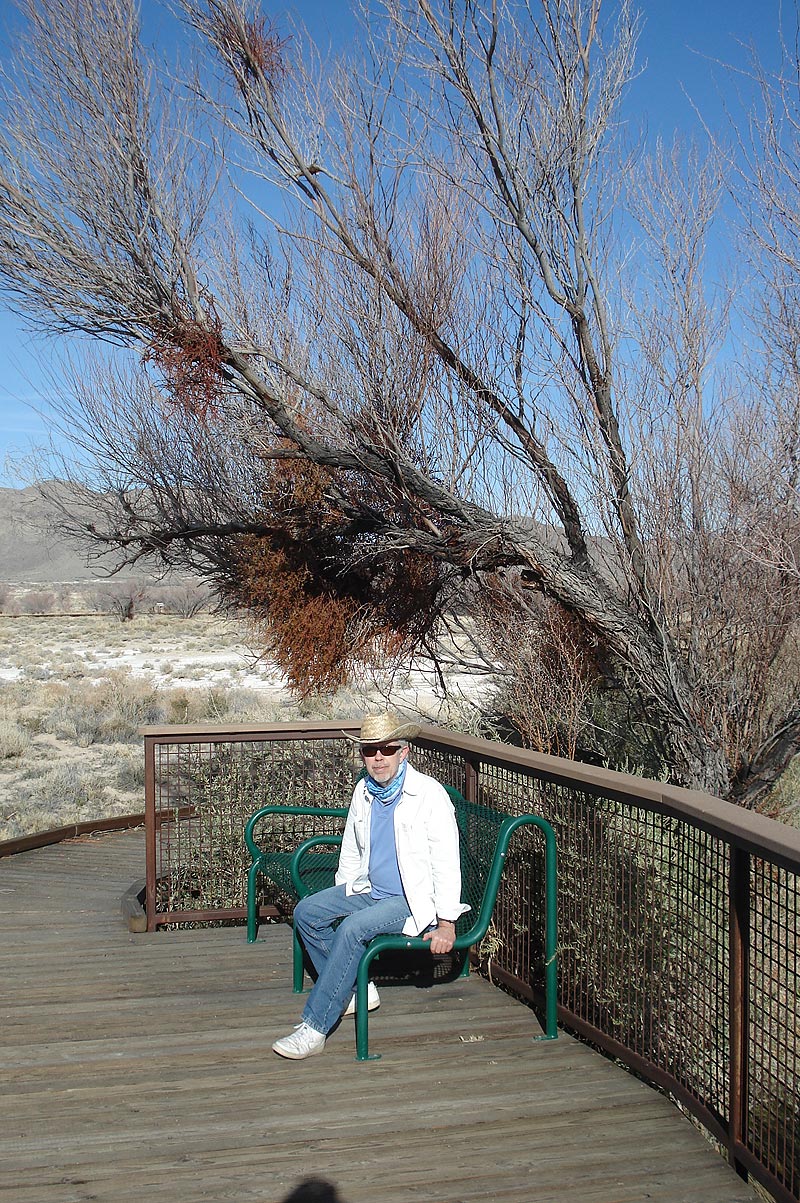 Nearing twilight on the reservoir. In the two photos you can just make out Mt. Charleston in the far distance between the hills still dusted with snow. 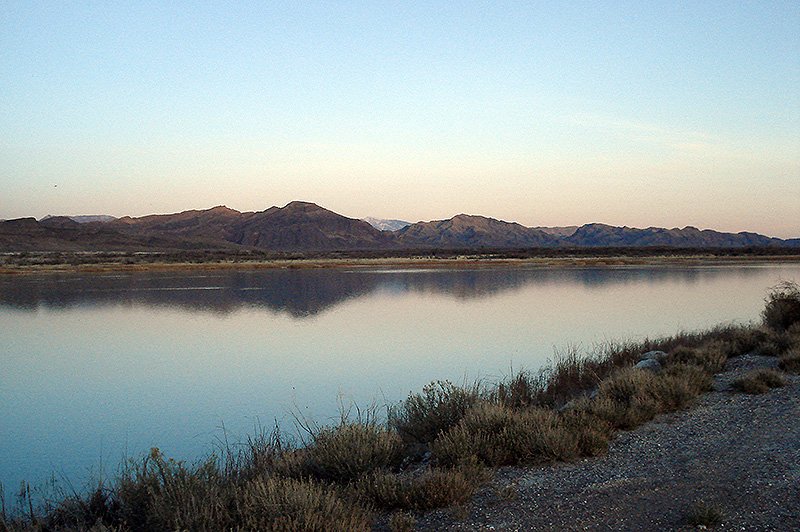 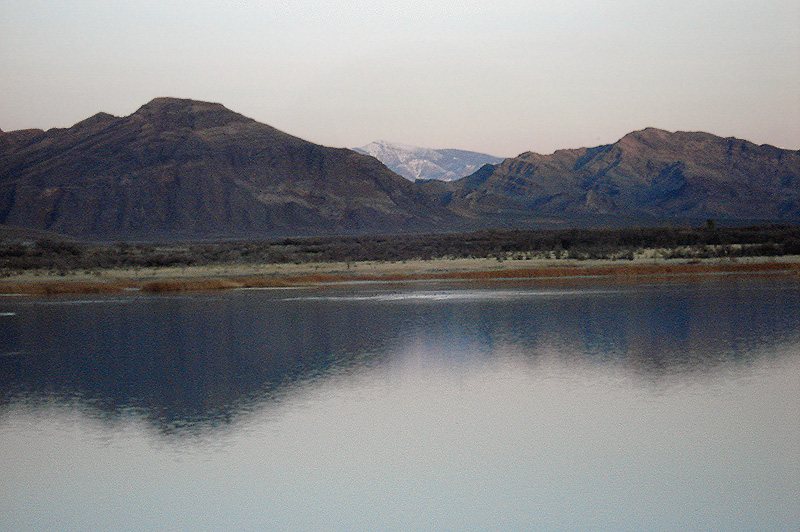 The road to Shadow Mountain. Well, that road doesn't really lead to it but it's symbolic enough in that I've been researching the mountain for future exploration. 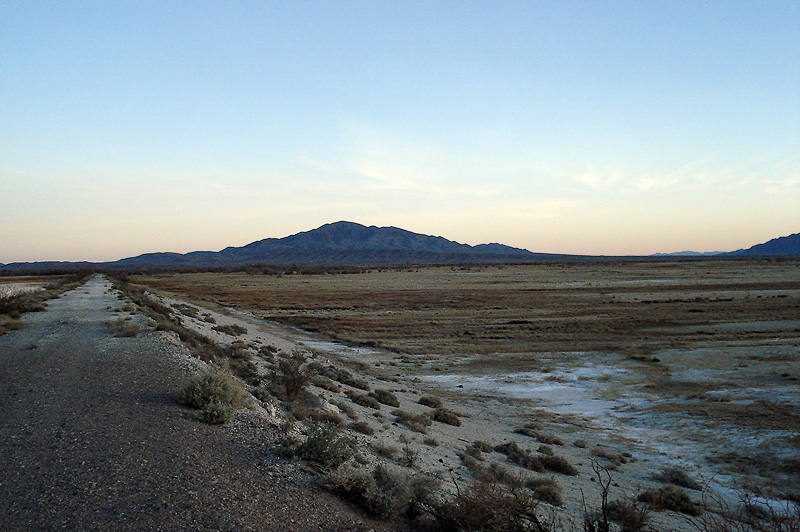 We didn't take too many photos on this visit to Ash Meadows, but that's all right. The mood was a quiet one and perhaps indicative of this particular time in the spring. The mind was taking more images than the camera could and that can also be said for the four days we roamed around. As for how things are in our respective worlds? We had ongoing conversations whether outdoors or when back at the apartment and I guess the best that can be said is that each of us continues to manage the journey and thankfully with a measure of interest and inspiration. Of course, at this time in our lives the ebb and flow of experience is an intricate thing. There is much knowledge to draw from but none of it is as immediate and palpable as that knowledge of the present moment, the moment when the traveler and the journey become one. That moment is the one that keeps the inspiration going for me.

Dave and I talked about the possibility of next time going to Northern Nevada for a few days, up to the Ruby Mountains and points in-between. That'll definitely make for interesting experiences and images to share with others such as I have done here.

Thanks to all who viewed this and may your own measure of interest and inspiration be abundant and graceful. If any of the readers have questions about Las Vegas and the nearby outdoor areas, please feel free to leave a note in the comments section or in the contact form.

Till next time, I leave you with a flowing, Ash Meadows stream. :-)