In 1989 I did some traveling around the Southwest. Instead of with others I did it alone. It felt proper, just me, the road, and the sky.

One day, driving from somewhere around the Carson City area toward Lake Tahoe I noticed a stream to my right. I'd been driving for awhile so I pulled over on a turnout to relax a little without the droning of motor and tires.

I walked over to the edge of the turnout and the view showed a cascading stream that contoured the descent of the highway. Water fell around 6 feet or so, leveled for another 6, and then fell again. I sat on a large rock looking at the water, the surrounding foliage and trees on this bright summer afternoon.

After a few moments an unexpected visitor appeared, a solitary cottonwood fluff floating ten feet or so above me and the stream. I watched its gentle movements: moving forward, a slight sway, and then forward again. Then it descended toward the stream.

I could sense what was coming. The fluffy traveler would soon meet its end in the water's cold and final embrace. As it neared the lip where the water fell I saw it disappear down and out of view.

But then I looked at the other level below the one I was at and much to my surprise the fluff was there, riding the delicate air currents cast from the stream's surface. It reached that level's lip and again it disappeared suddenly from view in the fall.

I stood up to get a view of the third level. Yes, there it was, defying the tiny rapids , approaching the falls and disappearing again. I could not see the other levels beyond that.

I smiled. Funny how I had logically thought the little fluff would meet its doom. It was as if the fluff, or something, was saying to me, "O ye, of little cottonwood fluff faith."

I like to think that the fluff was carried aloft by other winds, higher and higher, and that it too was enjoying the view. 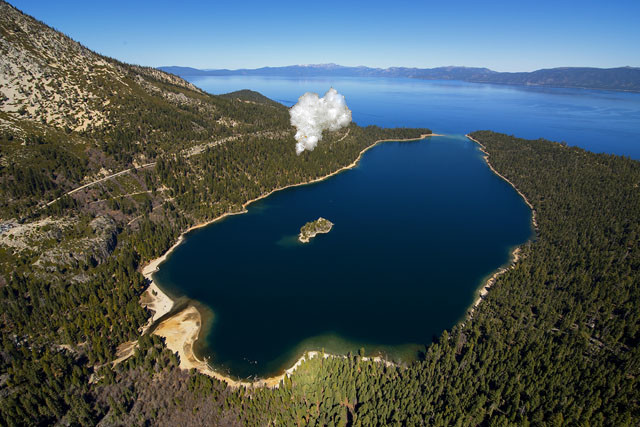